2019 was the fourth consecutive year of pursuing the strategy “We support the development of Poland and the Poles” by the Group. The strategy is a response to the changing market environment and the need to adapt to the new challenges ahead of the banking sector and the Polish economy.

Operations conducted by the Group in 2019 allowed it to achieve very good financial results and strengthen its leading position among the largest financial institutions in Poland. 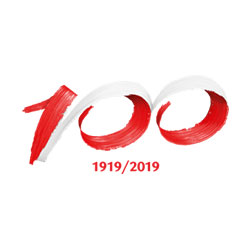 In 2019 PKO Bank Polski celebrated its 100th anniversary. The bank’s history began on 7 February 1919 when the Chief of State Józef Piłsudski, the Prime Minister Ignacy Paderewski and the Minister of Post and Telegraphs Hubert Linde signed a decree, on the basis of which Pocztowa Kasa Oszczędnościowa was created. The bank has since become the trend-setter of the financial sector in Poland: introducing attractive products and services, investing in breakthrough technologies and implementing innovative solutions. The direction of its business model’s transformation is closely related to dynamically evolving digitization of the social life in Poland and the country’s economic development strategy.

In 2019, we updated the strategy “We support the development of Poland and the Poles”. In subsequent years, we will utilize modern technologies and deepen the relationship with our customers by responding to their individual needs through remote channels, precise offer personalization and advanced analytics, in order to become PKO Bank of the Future.

The updated strategy extended the time frame of until 2022 and acquired new challenging financial goals. By 2022, the bank’s Group plans to achieve return on equity of 12%, reduce cost-to-income ratio to 41%, maintain the cost of risk within the range of 0.60-0.75% and earn an annual net profit over PLN 5 billion. One of the goals is also related to an effective management of capital adequacy, which would enable the capital ratios to meet the criteria for dividend disbursement. The strategy also includes non-financial factors – environmental, social and governance. PKO Bank Polski will pursue its strategy along four pillars, becoming:

Shaping competences of the future

The best mobile banking in the world

We offer our customers the most advanced mobile banking system
in the world – the IKO application. At the end of 2019, the number of active IKO applications reached 4.2 million.

For the second time, IKO was ranked first out of 100 mobile applications by Retail Banker International in February 2019. The ranking is based on customer reviews provided in iOS and Android application stores. IKO received an average score of 4.8/5 based on nearly 300 thousand reviews, far exceeding scores given to mobile applications of banks from all over the world.

IKO is the most popular and most transactional application in Poland. Every half a second our clients make mobile payments, and they already log into IKO 60% more often than they do using the iPKO online banking website. So far, they have made 350 million transactions via IKO. 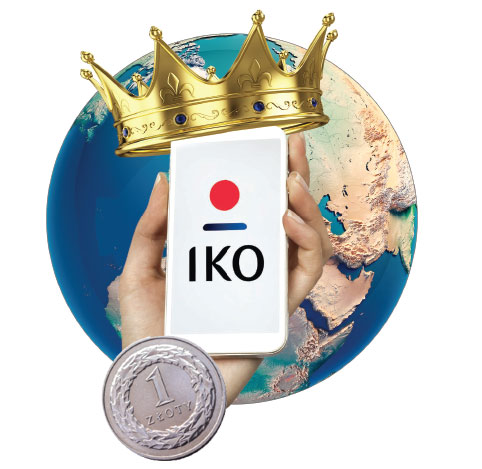 The Group expands its operations

For two consecutive seasons, the top football class in Poland will hold the title of PKO Bank Polski Ekstraklasa (Premier League) starting from 1 July 2019. The bank’s brand, as the title sponsor, will be present at all 296 matches during 37 rounds. As part of the agreement, PKO Bank Polski has remained the official bank supporting the premier league and continued projects, already launched in the previous season. In 2019, the bank also launched a partnership programme addressed to various clubs in the premier league. The new initiative enables clubs to obtain additional financing upon promotion of the bank’s products among fans.

The Group introduces “green products” and improves its ESG rating

In 2019, the Group introduced new products in its offer to support sustainable development and environmental initiatives:

Our activities have been reflected in higher ESG ratings:

The ESG Sustainalytics rating is one of the adjustments used in the WIG-ESG index launched on 3 September 2019. The bank’s participation in the index is at the highest level possible at 10%.

We offer modern and comprehensive solutions to address the needs of our customers by introducing and developing innovative services in digital communication, which include iPKO and iPKO Biznes services, and IKO mobile application. The Group provides its customers with professional tools that facilitate their control over finances and conducting business activities:

Operations conducted by the Group in 2019 allowed it to achieve very good financial results and strengthen its leading position among the largest financial institutions in Poland.

Net profit of the PKO Bank Polski Group in 2019 amounted to PLN 4 031 million, which indicates an increase of 7.8% y/y. The net profit growth was determined by:

As a result of business decisions taken in 2019, there was a clear increase in the scale of operations: